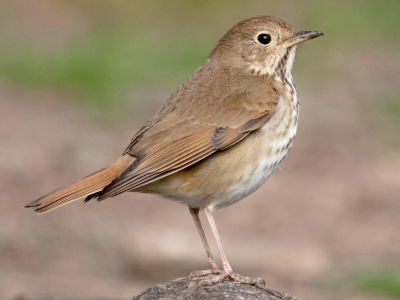 An address in honor of the Religious Studies Majors 2021

Late last summer, a little hermit thrush hit the kitchen window of our family’s cabin in Maine and, stunned, fell to the forest floor. I wasn’t there. I was here in Durham, hoping I could figure out how to teach in the middle of a pandemic, in the face of a national and global disaster where so much had been exposed and so much misery and injustice made transparently obvious. Some of this disaster had already been going on for a very long time, but now it was out in the open for all to see, a globalized human society bent on discrimination thrown into relief by an indiscriminate virus. Leonid, my partner, was there that day, and, hearing the thud, he went outside to investigate, and saw the thrush, laying perfectly still on cold, wet leaves. He picked it up, hoping it was alive.

For those of you who don’t know about hermit thrushes, they are small brown birds, about the size of Carolina wrens, mostly brown with a white breast with little brown flecks. They hide in forests, well-camouflaged and difficult to see while they rummage on the ground for insects. In the New England summers, one hears them in the woods, singing the most haunting, beautiful song. The state bird of Vermont, known as “The Voice of the Northern Woods,” they are well loved by anyone who takes the time to listen. They winter in Mexico, fly back in the spring, and can be heard, calling to one another.

At any rate, this particular little bird, stunned but with its little heart beating furiously, sat still in Leonid’s hand for almost an hour, then shook its feathers and flew off again. The thrush learned the hard way that window glass is a barrier, not an opening to yet still more woods. A misleading reflection had tricked it into thinking it could fly right through, from tree to tree, and get to where it was going. Instead it hit something, smash, and, stunned into semi-consciousness, could no longer move, though it was time to get going, to fly south and further south, past cities and towns and lights and still more treacherous windows. Did you know that 1 billion birds die each year from glass strikes?

The word “to stun” seems appropriate for today. Here we are celebrating the stunning accomplishments of these five remarkable graduating seniors. Their stunning brilliance, the stunning beauty of the bright forward way they illuminate, and the stunning precision with which they tell the truth. Aren’t our hearts all beating more quickly and the feathers of our wings trembling, watching them (even here on Zoom) as we remember what it is like to fly?

But this has also been a stunning year in other ways: a window glass we didn’t see hit us and knocked us flat and some of us didn’t get up. And there wasn’t just one small pane, but many treacherous windows that deceived with their seeming invisibility even though they were actually more like brick walls or prison bars or guard houses with guns. Some (the wise ones) already knew that what was reflected back from the surface glass was a ruse, designed to turn some back, to keep some out, and to let certain people in. Some people already knew that attempting to fly through this fake forest could mean landing flat, semi-conscious and inert on the ground. And that was the lucky ending.

Poultry is stunned before slaughter. The prophet Ezekiel sat stunned for seven days with the prisoners of war camped in the ruins of Tel-abib. The Qur’an warns of the stunning blow that awaits those who prefer blindness to revelation. Daunte Wright was shot and killed when Kim Potter confused her stun gun with her actual gun. My neighbors were stunned when the Durham police threw a flash bomb through the front door they had opened, willingly, to the knock. A stunning 433,927,559 persons in the world have tested positive for COVID-19 and 3,182,962 have died. Stop, little bird, and swerve before it is too late. Stop, those of you with the luxury of windows. Put up decals and warn the birds. Do exercises in depth perception. You birds among us: remember the stunning blows but shake them off if you possibly can and, while your heart is still beating, fly again. The Bird Safe Buildings Act is once again before Congress. Maybe it will pass this time. Bird safe glass isn’t even that much more expensive. Now that you know the glass is killing the birds, why not do something about it?

Religious Studies majors don’t engineer bird safe glass (I’m so glad someone does!), but they do help the world see misleading reflections, one pane at a time. And they also help us gaze through windows into other worlds to find both ourselves and something different from ourselves. A bird oracle (what Evans-Pritchard called a “poison oracle”) is both a technique for receiving otherwise hidden information and a way of re-building human relations in a context of rupture. Murmuration is a cascading, impossibly coordinated movement of a flock of birds through the sky and also a pattern that, if you were an ancient Roman, might reveal what the gods have been planning. A window is a place from which to gaze outward and also a barrier that keeps out rain that might otherwise fall from the heavens and flood the earth. A window is a word and a narrow opening through which one might gaze into the deepest of thoughts, glimpsing the seen and the unseen. And these are just a few of the ways birds and windows show up in the religions we study together.

Our Majors have spent their time at Duke learning how to see through different kinds of windows, reflecting on the efforts of human collectivities to make sense of intricate and complex worlds. They have poured their energies into making Duke, Durham, North Carolina, and our larger global home a place where humanity can thrive together in what Martin Luther King Jr. called “the beloved community.” They have made music and written articles. They have given speeches and claimed their necessary voice. They have helped one another and been kind. They have been co-learners with their professors and fellow students. They have written award-winning theses and also won so many awards! (You’ll hear more about that later.) These students have transformed Duke and us and we are so grateful to you, their families and friends, for sharing them with us for a little while. We have delighted in their song but it’s time for us to let them go.

It’s early May and the thrushes are winging their way back north over mountains and rivers, cities and towns, farms and forests to find they places they know below. Our students will head north and east, south and west, far and near, where they will find a new place to build a nest, sing a song, and greet the day. To get to this place, they worked so hard, supported by those who nurtured them into life and took the time to teach them to sing. Knowing these students, here’s what I know about what is going to happen next: When they come upon a stunned bird, they will sit calmly beside it quietly waiting for it to fly and rejoicing when it does. When they see a window that is not a window but a death trap, they will say and do something about it. Looking through windows, they will see the sky. Stunned silences, they know, though appropriate in the face of a stunning year, must be broken. Thank you Tatayana and Julia, Caleb and Schuyler, and of course Morgan, whom I know the best. Good luck! Stay in touch! Fly back to visit! We miss you already.