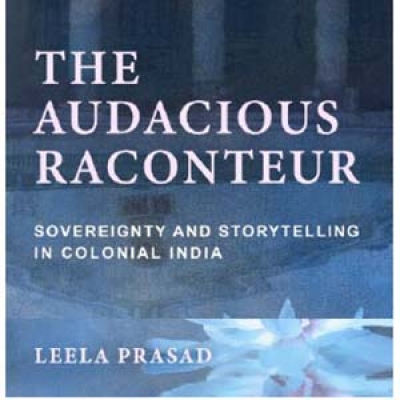 Can a subject be sovereign in a hegemony?

Can creativity be reined in by forces of empire?

The Audacious Raconteur argues that even the most hegemonic circumstances cannot suppress "audacious raconteurs": skilled storytellers who fashion narrative spaces that allow themselves to remain sovereign and beyond subjugation.

Engaging history, anthropology, folklore, literary studies, and religion, the book tells the stories of four Indian narrators of different castes and religious  backgrounds who lived in colonial India: an ayah, a lawyer, an archaeologist, and a librarian. These narrators, through their vigorous orality, intrepid wit, maverick use of photography, literary ventriloquism,and bilingualism, dismantle the ideological bulwark of colonialism—colonial modernity, history, science, and native knowledge. They question the very disciplines of history, anthropology and science.

Prasad’s research of over more than two decades traces living descendants of three of these narrators. The Audacious Raconteur is thus part-ethnographic, part-archival, and part-memoir. It demonstrates that the figure of the audacious raconteur does not merely hover in an archive but suffuses everyday life. Standing against currents of power, racism, and other forms of othering, the audacious raconteur is an indomitable—and necessary—ethical and artistic figure in human experience.

EXCERPT:
“…audacious narrations command an epistemic sovereignty, which shows that the “ethnographic state” could not become sovereign. If part of the empire’s claim to power lies in its pretense to omniscience, audacious raconteurs—who own and control indigenous narrative space—challenge this power, even revoke it. Their narrations index spaces that the colonizer is unable to usurp. The raconteurs demonstrate that colonial knowledge about India was hollow because it tried to erase what could not be erased: an ethos of oral culture, ties of kinship, and varieties of past-consciousness; in short, the everydayness of everyday life.”