Hear how some influential Korean composers of the 20th century asserted their cultural heritage and responded to contemporary musical ideas.

This concert features chamber music by Korean composers from the mid-20th century, when Korea was going through one of the most tumultuous times in its history.

After being liberated from the four decades of colonial rule, Korea faced still more interventions by the US and the Soviet Union that eventually led to the division of the country into two.

With such foreign presence, new musical styles flooded into Korea, one of them being the avant-garde music of the West.

Join us to find out how some of the most influential Korean composers of the twentieth century negotiated their desires to assert their cultural heritage and the need to respond to contemporary musical ideas.

Tickets are free, but required, and can be obtained at https://bit.ly/DKFconcert2021.

Seats for in-person attendance are limited in number and are available only to members of the Duke community to maximize social distancing. Per Duke policy, masks must be worn by all individuals while indoors or in proximity to others while on campus.

This event will also be livestreamed; links will be sent to all ticketed viewers. 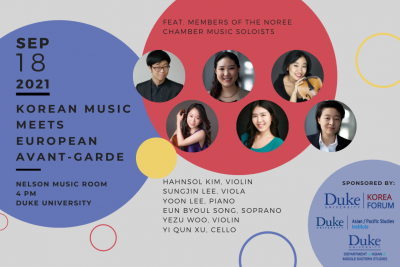